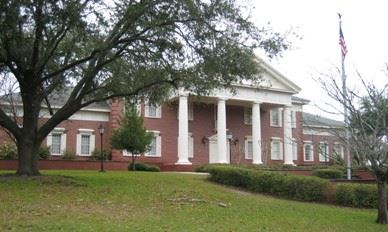 
The first library in Crestview, Florida was started in the 1940's by Bertha Henry in her home, located at the present site of Crestview Memorial Funeral Home on East Pine Avenue. She established the library using her personal books as well as books belonging to her mother. Later, she also used the services of the Episcopal Church lending library.


Next, Bertha moved the library into the Episcopal Church which her mother Lucy Henry had endowed. The library was called the Lucy Henry Library. It was later moved to a small house on West Highway 90. The Woman's Club of Crestview later took over the library and located it in an apartment on East Woodruff Avenue. As the library grew, it was moved to a shopping center on West Highway 90. The library remained in this location until a new building was constructed in 1976 near Twin Hills Park on East Highway 90. This building was named for Congressman "Bob" Sikes, the U. S First Congressional District Representative for 38 years from 1940 to 1979.


The City of Crestview sold the East Highway 90 building to Okaloosa Walton Community College (now Northwest Florida State College) in October 1993, enabling citizens in the north Okaloosa County area to attend college without traveling to the OWCC Main Campus at Niceville. The library still remained in a portion of the OWCC building until funding was secured to design and construct the present Crestview Robert L. F. Sikes Public Library located off North Highway 85 at 1445 Commerce Drive behind the Post Office. The current City library opened in June 2002.


The library is a member of the Okaloosa County Public Library Cooperative.